Hands Give a Lift, Now They Get One 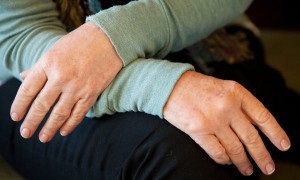 RL Peters, 67, a retired teacher, had her hands treated, above, after she noticed brown spots, wrinkles and bulging veins, below onscreen.

DORIAN GRAY’s countenance may have had the texture of a baby’s behind, but did anyone ever look at his hands?

“As you get older, your hands lose volume, fat and elasticity,” said Dr. John F. Farella, a plastic surgeon with offices in Mount Kisco, N.Y., White Plains and the Riverdale section of the Bronx. “The fatty layer of the hand disappears, so the skin is more translucent and shriveled, and you see underlying structures like bones, tendons and veins.”

RL Peters can attest to this. She grew up worshiping the California sun, and over the years her hands became dotted with brown spots and embossed with wrinkles and bulging veins. “The skin doesn’t bounce back when you pinch it,” said Ms. Peters, a retired teacher. This bothered her.

Ms. Peters is not the only person who knows that aging is no longer measured by crow’s feet and saggy jowls (for which corrective procedures are increasingly common), but by the dorsal, or top, part of the hands, where the skin is thinner and tends to crinkle over time. “Look at Madonna or Sarah Jessica Parker,” said Dr. Keith Marcus, a facial plastic surgeon in Redondo Beach, Calif. “They have amazing bodies, but their hands have aged. You can almost see Madonna’s veins popping out.”

Indeed, Joan Rivers, no stranger to plastic surgery, suggested to The Huffington Post after Madonna’s recent Super Bowl performance that she favored fingerless gloves because “she’s trying to hide those wrinkly old hands.”

Mittens wouldn’t be practical for Ms. Peters, who lives in Manhattan Beach, Calif. And so, during a visit to Dr. Marcus for some work on her face, she asked if he could do anything for her hands.

As it happened, Dr. Marcus, like many other doctors, now offers a “hand lift.” During the 5-to-10-minute procedure, which costs about $1,200, he injects synthetic fillers like Radiesse, Juvéderm or Perlane under the first layer of skin to plump it up, or uses a combination of fillers, intense pulsed light and CO2 laser resurfacing to remove sun spots (about $1,500). The effects typically last about a year, he said, adding that the hands have become one of the most popular areas in his practice.

“Over the course of the next three or four years, you’re going to see a lot of focus on this,” Dr. Marcus said.

Dr. Neil S. Sadick, a clinical professor of dermatology at Weill Cornell Medical, agreed. “The hands are a hot new area,” he said. “Now that we have the face so well treated, we’re looking at the hands, neck and décolleté.”

Dr. Sadick uses the Fraxel laser to remove diffuse wrinkling or discoloration; Thermage for skin tightening; sclerotherapy, which involves injecting a solution directly into the vein to treat varicose veins; the Q-switched laser, which fires very rapid pulses and blasts away pigment spots, and injections of fat to plump up the hands.

Dr. Sadick was quick to add that surgical removal of excess skin is not a viable option for the hands because it causes scarring and doesn’t heal well. There’s also a greater risk of complications.

“You’d have to literally take a scissors and separate the tissue, and you might interfere with some of the tendons,” Dr. Farella said. (Botox is also impractical; it inhibits muscle movement and does nothing for volume loss.) And, as with any filler, potential complications exist, including infection, skin discoloration, nodule or granuloma formation, asymmetry and skin necrosis.

But Dr. Amy Wechsler, a Manhattan dermatologist, said those blights are the exception, not the rule. “The most common reactions are local bruising and swelling,” she said, adding “If you’re having your hands injected like your face, do it with a very experienced injector.”

Dr. Wechsler also uses Fraxel to remove brown spots and fine lines, and her office sells hydroquinone pads, which also help with pigmentation, as does Retin-A. But her biggest recommendation: Wear sunscreen, ideally SPF 50. “So much about hands is about sunscreen,” she said. “Treat your hands like you treat your face. People wash their hands so much these days that they’re washing off their sunscreen. I keep a small sample size of sunscreen in my handbag.”

Dr. Farella prefers to reinject fat from a patient’s derrière or thighs into the tops of the hands or even fingers. (You can go all the way up to the first joint.) “I don’t use Radiesse or Sculptra, because it’s expensive and not as long-lasting as the fat,” he said. “Fat is more permanent and the chance of rejection is less, because it’s from your own body.”

In January, one of his patients, Sandy, 62, an artist in Hastings, N.Y., who asked that her last name not be published, had Dr. Farella remove about 30 cubic centimeters of fat from her thighs to inject into her hands. A few weeks later, “It’s still a little bit swollen, but I like the way it looks,” she said. “It’s not perfect, but I don’t look down at my hands and think about my grandma.”

Ms. Peters was equally pleased. Her hands were slightly swollen and dotted with dark spots for about 10 days, but later they smoothed out and the spots faded. “I told the doctor that this is one of the most important things he can do for older people who have a young lifestyle and are taking good care of their face and bodies, but if you look at their hands, there’s a giveaway,” she said.

And what of elbows, perhaps the final frontier of the aging wars? Can anything be done for the saggy, rough skin there? Not yet. “Elbows leave a scar,” Dr. Marcus said. “To me the trade-off is not worth it.”

Dr. Wechsler often prescribes a medication like Carmol, a thick cream to help with dry skin on elbows and heels. A cut lemon, like the one Susan Sarandon used in “Atlantic City,” can help to lighten and soften.

Or you could just do what Dr. Marcus suggests: “Wear a long-sleeved shirt.”

Accessibility: If you are vision-impaired or have some other impairment covered by the Americans with Disabilities Act or a similar law, and you wish to discuss potential accommodations related to using this website, please contact our Accessibility Manager at (424) 634-7044.
Contact Us